Where there’s smoke, there’s fire, and such is the case with the notion of a Fox Bros. Bar-B-Q restaurant planned for Brookhaven.  After we received several tips in November that the Fox Brothers were opening a new restaurant in Brookhaven Station (4058 Peachtree Road), reps for the restaurateurs denied the rumor. 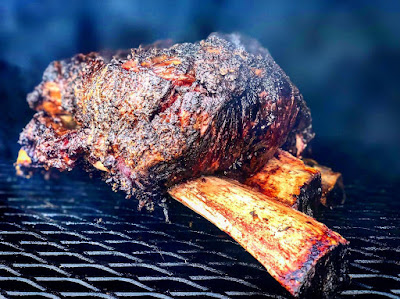 Flash forward to this week and and a separate reader brought to our attention that a newly updated site plan for Brookhaven Station now features Fox Bros. in the exact space reps for the restaurant denied last fall.  Additionally, further research indicates that Jonathan Fox registered “Fox Brookhaven, LLC” December 1, 2020.

The 3,260 square foot Brookhaven space that seems destined to become home to a new Fox Bros. was most recently Hudson FC, a soccer-themed restaurant from Metrotainment Cafes.  Hudson FC, which opened in 2017 and closed in late 2019, was the sibling restaurant of Hudson Grille, which itself closed in the Brookhaven center last March. Prior to Hudson FC, the space had been home to Pub 71 and Meehan’s before that.

When Jonathan and Justin Fox started Fox Bros. Bar-B-Q in 2004 out of their tiny Brookhaven house, the Atlanta barbecue landscape was very different.  Many of the popular barbecue eateries of today simply did not exist ten years ago.  That said, Fox Brothers has continued to be a local and regional favorite and the brothers have gradually expanded their empire.

Jonathan and Justin Fox opened the original brick & mortar Fox Bros. Bar-B-Q on DeKalb Avenue in Candler Park in 2007.  A decade later, the brothers opened a second location of sorts within the Terrapin Taproom at SunTrust (now Truist) Park.  In late 2016, the brothers introduced the “que-osk” a mini restaurant opened in a converted shopping container at Armour Yards on Ottley Drive.  A huge new location, 9,300 square feet, with two patios and seating for more than 300 patrons, was delayed from an expected 2020 opening but is now expected to open soon at The Works off Chattahoochee Avenue in northwest Atlanta.

Good barbecue can he hard to find, but it is also subjective.  In Brookhaven, residents already have two nearby options, Dixie Q, off Dresden Drive, which was opened by Chef Scott Serpas in late 2017, and Old Brick Pit Barbeque, located along Peachtree Road near its Brookhaven/Chamblee line, an area staple since 1976.

Fox Bros. opening in Brookhaven Station would be the third restaurant to have opened in the center since the start of the pandemic last year.  Ray Jr.’s Rapz wraps & smoothie bar opened in the former Sugar Shack, another former Metrotainment Cafes concept, earlier this year.  Atlanta Bar & Grille, which described itself as an “upscale restaurant where country club vibes meet a sports bar atmosphere,” “soft” opened in January in the former Hudson Grille, but by mid-February had “temporarily closed.”

Continuous Replay: Come Together, presented Wednesday night as part of the Georgia…

Atlanta’s newest Farm Burger restaurant is expected to open Wednesday April 21 in Virginia-Highland.  The restaurant, on which ToNeTo Atlanta was first in the city to report this past November, replaces YEAH! Burger which closed last summer after about a decade in business.  The new Farm Burger will be the Atlanta-based chain’s seventh in metro Atlanta and twelfth overall.  (Farm Burger’s Midtown location at Whole Foods Market remains temporarily closed.) 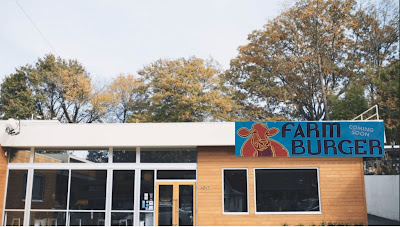 Despite the burger-to-burger conversion of the restaurant, Farm Burger did make some changes to the 2,200 square foot restaurant to suit their needs.  One thing that didn’t change, the former gas station turned restaurant still has an awesome patio located at the dynamic intersection of Virginia & Highland Avenues.

Farm Burger’s opening in Virginia-Highland is the latest in a string of recent and upcoming openings in the historic intown neighborhood current seeing a resurgence of interest and popularity.  ToNeTo Atlanta previously reported that Morelli’s Ice Cream will be opening a new location across from Farm Burger in the former Yogli Mogli, while Perc Coffee recently opened in the former Cacao a few storefronts away.  Doughnut Dollies is also expected to join the Virginia-Highland community later this May when it opens at 1002 Virginia Avenue in the old Dtox Juice space.

What is your favorite burger eatery?  Who in Atlanta do you think makes the best fries?  What other types of businesses would you like to see open in Virginia-Highland?

After more than 25 years in the burrito business and with more than 30 Willy’s Mexicana Grill restaurants open, company founder Willy Bitter is launching a new concept: Howlin’ Willy’s.  Slated to soft open next week in Midtown, Howlin’ Willy’s will feature several hot chicken varieties as well as a few sides.  The initial location, a mere 800 square feet or so, will serve as a the “proof of concept,” and if successful, could be the first of several he opens.  The Midtown outpost will be adjacent to the existing Willy’s at 1071 Piedmont Avenue on the edge of Piedmont Park.

Bitter has reportedly been toying with the idea of a hot chicken chain for several years but having pulled back on potential regional expansion due to COVID-19 and with a growing supply of second generation restaurants Bitter figured now was as good a time as any to launch the new concept.  Additional “shop-in-shop” locations – ones located within or adjacent to existing Willy’s restaurants – could follow soon with the potential for other freestanding/inline locations as well.  Future locations would likely be 1,500 to 2,000 square feet.

Howlin’ Willy’s is opening in space previously used by the Piedmont Park Conservancy facing Piedmont Park.  The space, along with a larger suite beside it, were previously to be part of a pair of new concepts from the owners of The Nook on Piedmont Park, but after announcing plans for the concepts in 2017, the plans were abandoned in  2019.  Howlin’ Willy’s will share some kitchen and dining space with Willy’s Mexicana Grill, with a new Shake Shack expected to open in the larger vacant space in a few months.

According to JC Garcia, President of Willy’s, everyone is very excited about the new hot chicken concept and like anything Willy does, it’s a “step above.”  The menu will initially be limited to three chicken options – sandwich, tenders or wings – but will be expanded in the coming weeks to include more variety such as a quarter, half and full bird.  Having experienced some disappointing sandwich breads in our day, we were pleased to hear the restaurant will feature buns from locally owned Engelman’s Bakery.  Side options include a gourmet three cheese mac & cheese and apple pie, as well as soft serve, a recent addition to Willy’s at the park.

Garcia tells ToNeTo Atlanta that the chicken will come in four heat levels – not hot, kinda hot, Willy hot and Howlin’ hot, with top heat level including ghost pepper.  Check averages are expected to be slightly higher than Willy’s, with Garcia expecting individuals to spend between $9 and $14.

While several years ago Howlin’ Willy’s could have been among the first hot chicken concepts in town, their entry now comes at a time when chains like Hattie B’s and Joella’s have already set up shop and upstart concepts like Scoville Hot Chicken recently launched.  We at ToNeTo Atlanta are definitely team Willy’s and are definitely looking forward to checking out the “kinda hot” sandwich!

Howlin’ Willy’s is currently slated to open weekdays starting Monday April 19 through Friday April 23, 11AM to 4PM.  Additional hours, weekend service and an expanded menu are expected to be introduced in the coming weeks.  One nagging issue facing not only Willy’s, but basically every other restaurant in town and in the country, is staffing.  According to its website, Willy’s offers employees great benefits and free burritos with Garcia telling ToNeTo Atlanta that the company is also incentivising current and new employees to get vaccinated.  Those wishing to join the Willy’s team at any of their Atlanta area restaurants should apply here.

Are you excited about the idea of a Willy’s backed hot chicken joint?  What is your favorite hot chicken in town?  Where would you like to see Howlin’ Willy’s open next?

The period following Earth Day is a great time to think about the impact our homes have on the environment. But beyond lowering your environmental impact, increasing your home’s efficiency … Click to Continue »

In Sandra Fernandez Rhoads’ debut novel, “Mortal Sight” (Enclave Publishing), Cera Marlowe finds herself in a supernatural world tortured by bloodthirsty, shape-shifting beasts that only she can see — or … Click to Continue »