Not only are Destin’s beaches seriously amazing, but their fishing is too! In fact, Destin is known as the “Luckiest Fishing Village.” Here are 19 of the best fishing charters that Destin has to offer.

In the past decade, Killamari and his spray cans have traveled throughout…

The post Today in street art: The ever-expanding universe of the muralist known as Killimari appeared first on ARTS ATL.

ToNeTo Atlanta has learned that plans are underway to convert the 2,297 square foot Peachtree Battle  Zoës Kitchen in Buckhead into a new Cava.  On February 4 we were first to report that the Washington D.C.-based chain also plans to convert the  Zoës Kitchen in Tuxedo Festival in North Buckhead.  The Peachtree Battle and Tuxedo Festival Zoës  opened in 2009 and 2010, respectively, and were the first to open in Atlanta when Zoës had about 50 locations. 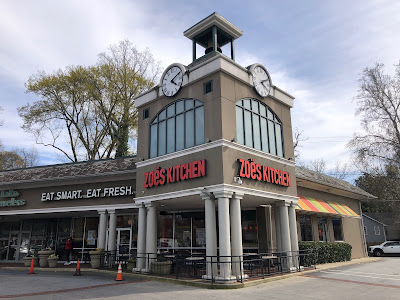 Another location at 145 Alps Road in Athens is also expected to be converted to Cava.  Cava Group, parent company of Cava, purchased Zoës in 2018 for about $300 million.  At the time of the purchase, Zoës operated 261 locations compared to Cava’s 66.

Neither Zoës nor Cava have commented publicly about the planned conversions but filings and planning documents linked to all three locations indicate conversions are planned for each.

Although Cava has not said as much publicly, our review of each brand’s store count suggests the ultimate plan is to strip Zoës of key locations either by closing or converting them, and ultimately phase out the Zoës brand altogether.  If this does happen, it would be incredibly sad for many reasons, not the least of which is the fact that Johns Cassimus, son of founders Marcus & Zoe Cassimus, credits its creation with saving not only his parents’ livelihoods, but their marriage too.

Marcus & Zoe opened the first Zoës in the Birmingham suburb of Homewood in 1995. John later grew the business into the regional chain it became.  When the company went public in 2014, it left its roots behind and moved its headquarters to the Dallas, Texas suburb of Plano.

In the roughly two years since the acquisition closed, the combined store count has dropped from 327 to 288, or a roughly 12 percent decrease.  A deeper look at those numbers reveals something more telling.  At the time of the 2018 acquisition, Zoës operated 261 restaurants, today (exclusive of  the three known upcoming conversions), that number has fallen to 176 units, a 33 percent decrease.  At the same time, Cava’s 2018 store count has increased to 112 (exclusive of the three planned conversions and perhaps others, too), representing a unit growth of 59 percent!

A review of the Zoës website indicates that while the company currently operates 176 restaurants, it also closed/converted at least 55 over the past year.  In some cases the same locations are simultaneously listed [closed] on the Zoës site and open [active] on the Cava site.  The recent closures have resulted in Zoës complete exit from the Kansas, Colorado, and Missouri markets where they operated a combined eleven locations.  Two Colorado Zoës that closed were converted to Cava.

Last year, Cava Group completed seven conversions of Zoës locations and there are at least 12 in development for 2021, according to published reports.  “We see the ability to unlock significant revenue growth in Zoe’s real estate when we convert it to a Cava location,” CEO Brett Schulman recently told CNBC.  Cava said its collective real estate portfolio has allowed the company to enter new suburban markets more quickly, as it can convert a Zoës into a Cava location in half the time it takes to open a brand new restaurant — and at a lower cost.

Interestingly, a company representative told us recently that there are no plans to ever have reciprocal gift card policies between Cava and Zoës.

In metro Atlanta, the company last year permanently closed Zoës locations in East Cobb, West Cobb, Johns Creek and Sandy Springs, reportedly with no intention of converting any of the four to Cava.  The Johns Creek location (11350 Medlock Bridge Road) reopened in February as a second location of local Vietnamese restaurant Gao Fresh Noodle.  Following the four closures and three planned conversions, there will be 20 Zoës in Georgia.
One could argue that Zoës and Cava are similar, but they have substantially different menus, a different ordering process and cater to different demographics, which would seem to make the case for continuing to operate each of them.  Despite this, we can find exactly one Zoës that opened after the acquisition – in Gainesville, Virginia – that after opening in March 2019, was closed by April 2020. The Gainesville restaurant, like another shuttered unit in Raleigh, were the only two Zoës known to have featured the concept’s latest (final) design package that adopted a more mature and less youthful aesthetic with more warm tones and less bright colors.
When you consider that Hardee’s and Carl’s Jr. as well as Checkers and Rally’s, both pairs of restaurants which feature menus with more overlap than Zoës & Cava, each operate independently despite being sibling restaurants, one has to wonder why the same wouldn’t work for the two Mediterranean restaurants.  That said, sources close to the company tell ToNeTo Atlanta that there are no plans for any new Zoës locations and that Cava is the “growth brand.”
Cava, furthermore, has several more direct competitors including Naf Naf Grill, Hummus & Pita Co., Garbanzo Mediterranean Grill, The Simple Greek, Rōti Modern Mediterranean and Mezeh, among others.  [Garbanzo’s owner WOWorks acquired The Simple Greek this past March with no indication as yet that there are plans to merge the two brands, which as of now have similar unit counts at 20 and 24 units, respectively.]
Cava, often called the “Mediterranean Chipotle,” by purchasing and later converting Zoës, grew tremendously overnight, but definitely has its work cut out for it if it hopes to replicate the scale of its Mexican counterpart.  Chipotle’s five largest markets: California, Texas, Ohio, Florida and New York account for 1,235 units or more than four times the combined Cava + Zoës unit count!  Chipotle operates 68 restaurants in Georgia.  Overall, the company, which opened in 1993, has a  2,749 restaurant nationwide footprint plus several dozen international units, giving it a market cap of more than $40 billion!
If the Zoës brand is phased out, it would mark the unfortunate end of a beloved brand.  ToNeTo Atlanta spoke with Zoe and her son John in preparation for this post.  While Zoe could not put into words her disappointment at the prospective extinction of her namesake brand, John lamented the slow death the company has suffered in recent years.  Even before the Cava acquisition, John said, critical decisions were made that led to the chain’s under performance.  “Under my leadership,  Zoës experienced measured growth with industry leading unit economics, said Cassimus.”  “The Zoës of today is very different from the brand that I built.”
In 2018, Cassimus, then operating several chicken and sushi restaurants, sold his restaurant holdings to enter the liquidation retail business, an industry he tells ToNeTo Atlanta he loves.  “I’ll never open another restaurant,” Cassimus said, adding that he has several new Crazy Cazboy’s, his discount retail store, in the works for the south with metro Atlanta on the horizon.
Would you be saddened to see the entire  Zoës restaurant phased out?  What is your favorite OG Zoës menu item that is no longer on the current menu?
Please share your thoughts below
School’s almost out. The humidity is on its way.  It’s time to get ready for summer, y’all! Here are 67+ things to do in Atlanta with kids this summer.