U.S. Sen. David Perdue, R-Ga., has concluded a trip to China, where he met with senior government officials including that country’s top trade negotiator.
Atlanta is one of five locations where Rooms to Go plans to build its new, larger store.
Spelman will use the money to establish The Center of Excellence for Minority Women in STEM, which will serve as the hub for all STEM undergraduate research and training activities at the college.
Atlanta Business Chronicle’s inaugural Veterans in Business Awards honorees are scheduled to be honored on Sept. 12 at an awards event at Twelve Atlantic Station.
The owners of Taqueria Tsunami, Stockyard Burgers & Bones, and Forno Vero, plan to open a new concept later this fall in a familiar Marietta Square location.  Silla Del Toro, a Spanish style tapas restaurant and bar, will open at 30 South Park Square on the square in Marietta.  The new restaurant  replaces Pressed Panini Bar which closed this February after a little less than six years in business.  Pressed, like the aforementioned other three concepts, was owned and operated by local restaurant group Fork U Concepts Inc. 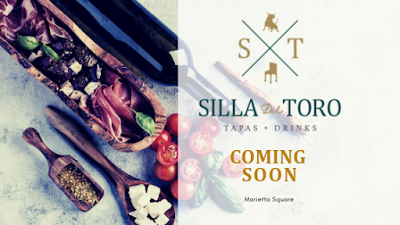 Ethan Lane, who most recently was Beverage Director and General Manager at Forno Vero which opened earlier this March in the Marietta Square Market, is serving as General Manager at Silla Del Toro, which roughly translates to “chair of the bull” in Spanish.  Before joining Fork U, Lane spent two years as assistant bar manager at Hugh Acheson’s popular Midtown eatery Empire State South.
Comparing the menus, it’s fair to say that Scott Kinsey and his team at Fork U was at least inspired by the menu and concept of Castellucci Hospitality Group’s The Iberian Pig.  The Spanish style tapas restaurant recently celebrated its 10th year in downtown Decatur and earlier this year opened a second location at Hanover Buckhead Village in Buckhead.
As of now, the plan is for Stilla Del Toro to open the week of September 15.
When it opens, Silla Del Toro joins a Fork U family of restaurants that today includes eight Taqueria Tsunami locations with a ninth opening soon at Madison Yards in Reynoldstown, three Stockyard Burgers locations in East Cobb, Marietta and Vinings, and the single Forno Vero.
Are you excited for the upcoming opening of Silla Del Toro in Marietta?  What is your favorite Fork U Concept?  What is your favorite eatery at Marietta Square Market?
Please share your thoughts below
Gourmet doughnut shop Bon Glaze abruptly closed both of its Atlanta area locations.  The shops, located in Brookhaven near Blackburn Park and in north Buckhead near Chastain Park, both opened in 2016, and according to signage and local sources, closed around Labor Day.  The Brookhaven  location, situated in a roughly 1,700 square foot space in Brookleigh Marketplace along Johnson Ferry Road, was almost three times the size of the satellite Buckhead location at just 604 square feet. 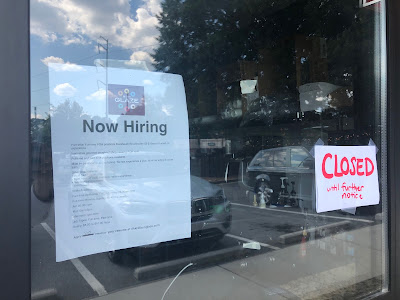 The Brookhaven location, which featured a drive-thru, functioned as the primary baking location for both shops with the Buckhead outpost having basically no food production on site.
Printed signage at the Brookhaven shop indicated it was “closed until further notice for restructuring,” while handwritten signage at the Buckhead location simply said it was “closed until further notice.”
Entrepreneur Kelly Keith opened the business with the help of her husband Kenny after running a successful cake business.  The Keiths previously had both Bon Glaze locations up for sale, but real estate sources indicate the shops were removed from the market several months ago.  It’s unclear if a sale was transacted privately, or if the Keiths were still the primary owners of the business. 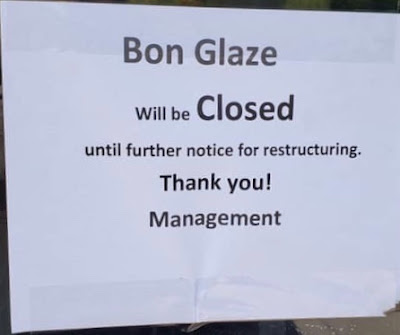 The sudden closure left many customers scrambling to replace preordered celebratory doughnuts and other items.  In Buckhead, many found nearby Duck Donuts and Dunkin’ Donuts to be great last minute options.
Do you have intel on what caused the sudden closure of both Bon Glaze doughnut shops?  What would you like to see open in the two now vacant spaces?  What is your favorite Atlanta area doughnut shop?
Please share your thoughts below.